I found myself getting frustrated with Visual Studio Code (vsc) today on Ubuntu with GitHub. I had a repository that was properly cloned, yet vsc insisted that “The folder currently open doesn’t have a git repository”. 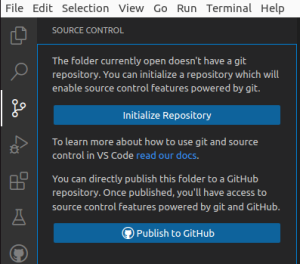 I installed the GitHub extension and confirmed my account was set in vsc and still no joy. Finally went to the terminal in vsc and ran git status and received the following:

and then there was 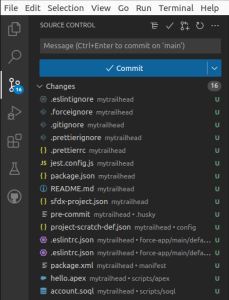 Much better organized than my own page (which is so lame it is hidden):

Before running the virtual CD:

If you use shared folders, to access them again afterwards:

Being late to Linux in my career, I’m fascinated by things many probably already find mundane, like tailing logs. Someone finally suggested to me that I could use Cygwin to do this in Windows. He was my hero for the day!

Speaking of heroes, the members of Stackoverflow have a great way to open a Cygwin console in any directory with a right-click, described at http://stackoverflow.com/questions/9637601/open-cygwin-at-a-specific-folder. I used the registry trick because the command-line approach didn’t work for me.

Authorization in Linux can be very fine-grained, a feature that admins take advantage of to keep the non-admins from making a mess of things. This is generally a good thing, though it can occasionally be frustrating. One such occasion is when newbies need to tar up a folder they have permissions on but do not have permissions to create files in that folder’s parent. For example, as a developer role on a machine I have ownership of myapp that is inside apps, which is owned by root. This would look something like:

The tar command creates a tar file from where it is run. If I wanted to create myapp.tar.gz I would normally run tar czf myapp.tar.gz myapp from inside the /apps path. But with no create permissions in that folder, I just get a snarky response from Linux.

Skipping the details of head banging on desk and key banging on Google, I found the following approach that does the trick.

From a path you have write permissions to (almost always your home directory if no where else), run
tar -czf [TARFILENAME].tar.gz -C [PARENT_DIR]/ [DIR_TO_TAR]
For example:
tar czf folder.tar.gz -C /var/www/ folder

The ‘-C’ tells tar to start from the path following rather than where you are at. So the following steps:

creates myapp.tar.gz in my home directory.

Problem solved. Of course, I only made this tar file because there were problems with the app, so there is still the problem of debugging, but I think we can both do that already.